Onwards! To 4K and Beyond the Infinite

Club3D is a hardware company that, aside from making AMD and Nvidia graphic cards, make a lot of useful adapters, dongles and gadgets. For instance we’ve been using the Club3D USB to DVI dongles quite a bit to add an extra highdef output to a laptop setup.

Here’s the nitty gritty on this little gadget.

It’s not a simple splitter, the operating system will see each of the three monitors as an individual output and you can send each different content, or one big video stretched over the 3 displays. That’s 3 times 1920x1200, son!

Displayport is a good cable, but very uncommon outside of an office setting. You can use miniDisplayport to Displayport going into the box, and Displayport to VGA/HDMI/DVI adapters going out of it, to convert from the DP cable to a cable you can actually use.

So after we got our two test devices in the mail (because we don’t mess around with only one if they’re only 100 euros) we quickly realised we only had miniDisplay connections, so we spent 30 euros more and waited another week for 2 miniDP to DP adapters. Sigh.

After a quick unboxing session, we found out that although the device looks very neat on the website, it comes with a big old power block which is nearly twice as big as the device itself. You can say things like that shouldn’t matter in a review, but it’s good to know about when you need to pack for aircraft regulation limits or stuff things into a backpack. 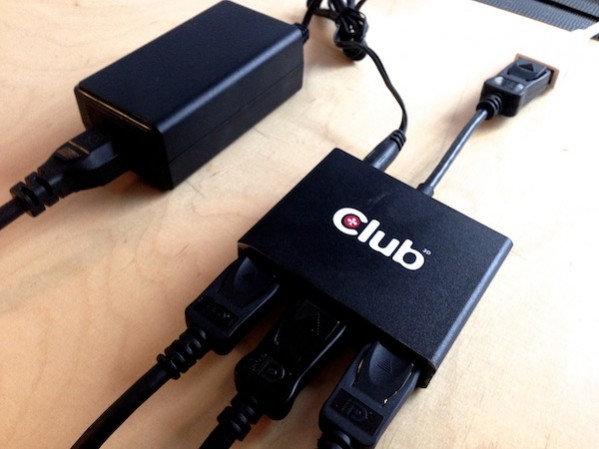 Then we grabbed the first available computer with a Displayport output, which happened to be Bart’s old MacBookPro. On OSX Mavericks it didn’t do anything at all. After booting into OSX Lion we were only able to get two monitors to work at some weird stretched resolution, or three monitors mirrored at 1920x1200. We’re not sure if this was to do with the Nvidia card in the machine, or to it being a Mac. All we could was shrug and move on.

Next up was our trusty old PC, also known as ‘old faithful’. Running a Club3D HD7970, it already handles 5 monitors, so it was the ideal candidate for pushing things a bit further. We didn’t have enough dongles to test with DVI or VGA leads, so we ran each box with a MiniDP to DP cable and then 3 DP cables to the monitors.

Getting every monitor recognised required a little setup dance. Sometimes a single monitor wouldn’t show up. Turning it off and on again causes the MST boxes to refresh, and each monitor would then turn off and back on, giving a nice cascading effect of monitors refreshing. Repeating this process once or twice always got the setup with 6 outputs working. Going through this dance felt a bit wonky, but compared to the hassle we’ve had with some Matrox TripleHeads, it was relatively painless.

This allowed us to run an impressive 5 individual outputs + 1 control monitor from two single miniDP outputs. Each display was running at a whopping 1920x1200, so we were able to run content at 5760x2400. It’s a powerful feeling and beautiful to watch. 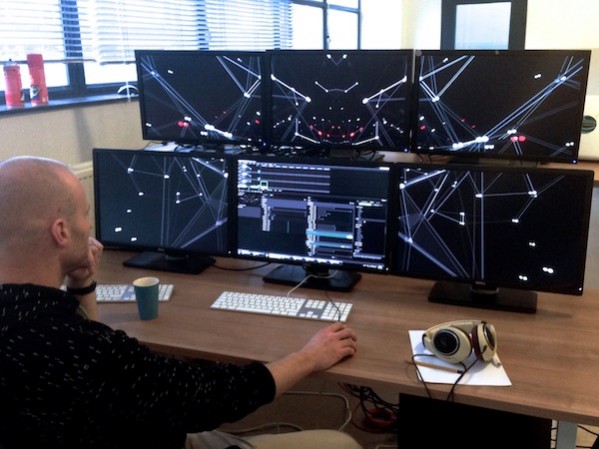 Of course we had to push the limits, and also connect the two remaining miniDP ports as well as the DVI output. The desk looked fancy sporting 9 monitors, but all we got was a lot of blue screen of death. So even though two MST hubs works flawlessly, using them in combo with a third display on the card was a no go. We're still not sure what exactly caused this, but there was no way around it.

We also got out our MacPro with a Radeon 5770 in it. This one did not do anything at all. Two hubs, one hub, OSX Lion, OSX Mavericks, with additional monitors connected via DVI/MiniDP, or without. Nothing would show up on the screens or cause OSX to even recognise them. Very confusion, much try, such disappoint.

When Push Comes to Shove

Probably one of the more interesting things was how well Resolume performed. Performance wise it didn’t really seem to matter if we ran with the hubs or with a single card with 5 outputs. So we finally have some benchmark tests on multiple HD streams on a PC rig. The specs of this guy are as follows: Antec eight core i7, 3.2 GHz, 8GB RAM, Win7, one Club3D Radeon HD7970, with OCZ Vertex SSD drive.

When running a 1080p comp with 1080p content, with layer 1 through 4 routed to its own screen via Arena’s Advanced Output and the comp routed to the last screen, we could rock 6 layers at 60fps steadily and easily. Up to 8 layers was still doable, a few dips in fps, but nothing going below 30 fps.

One layer is fine at all resolutions, with a smooth 50-60 fps. Adding another layer brought things down considerably. Interesting enough, a lot of this is dependent on the content itself. Photorealistic material taxed the system a lot harder, dipping to the low 20s with two layers and unusably slow with three. More VJ oriented content with lots of black and high contrast imagery ran a lot better, and we could mix 3 layers of 5760x2400 at around 30 fps. Remember the days when 3 times 320x240 was impressive? 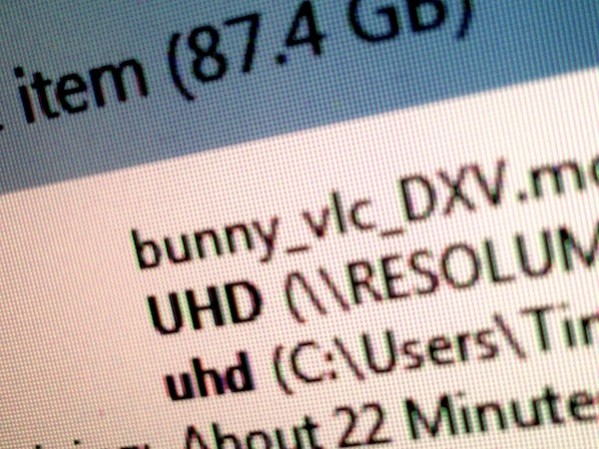 Playing with the big toys

So What's the Dealio

All in all the MST boxes are a cheap alternative to what Matrox has to offer, and can support up to 3 times 1920x1200. But with compatibility issues and the startup process not completely hassle free, we wouldn’t recommend this for permanent installs. If you have a compatible graphic card and are looking for a cheap way to considerably extend your output, you can’t beat the price. Just be prepared for a little more hassle during your setup process. Posted by Joris on Tuesday January 21, 2014 at 14:28 Tags: Club3d
Comment from cosmowe:


Thx Joris!!!
Will now also put my fingers on one or two of these bunnys. Testing them roughly..u no bro


your displayport connector/card needs to run displayport 1.2 - that allows that big resolutions and can either push out one 4k signal or daisychain up to 4 displays - if the display got an in and out DP connector.

i guess the older macs just dont have DP 1.2 - also try to find out if your windows card supports it before you buy!


Was on the fence about ordering one of these. Should give it a go. Thanks.

PS. Stop teasing us with that plexsus plugin! Looks great!

I installed Windows 8.1, and it works! So the Late 2013 15" Macbook Pro Retina (with GeForce 750M) is capable of driving multiple displays via DisplayPort 1.2 MST.

However, OS X Mavericks is not.


I seriously want to know more about this Plexus plugin. It looks supremely fun. I'd especially like to know if there's any way I could get it.


Hi guys!! Amazing to save some bucks in Matrox Store

Did you try to run 2 MiniDp from your graphic card (then have 6 outputs Through 2 CLUB MST) and the DVI or HDMI output from the graphic card just used for Monitor (Resolume Interface) ??


palnoise wrote:Hi guys!! Amazing to save some bucks in Matrox Store

Did you try to run 2 MiniDp from your graphic card (then have 6 outputs Through 2 CLUB MST) and the DVI or HDMI output from the graphic card just used for Monitor (Resolume Interface) ??

Cards max out at 6. This isn't a splitter from what I've read. Comment from buttza:


I think you may have maxed out the native resolution.


In this video AMD states that it is a hard limit they designed in the engine. It is possible to connect up to 6 displays to one video card.


Is there a way to know how much output resolution can your system handle? NOT comp size in resolume!!! I mean specifically the total output resolution from your computer distributed among all outputs.
For instance, I have the GTX 680 gpu, and have been able to get 11 separated outputs working together (10 for projection + 1 for control screen).... Total comp size was 10240 px width and 768 px height... that means each screen output was 1024*768 px. .. That means a total output of 11008 px wide * 768 px height!!!! I haven´t been able to test any further so far....
I know there are issues regarding benchmark (fps and stuff) for this comp this size, but that´s not the point here.

My question is regarding all this dongles (USB to hdmi, VGA or DVI) and all this matrox and datapath expansion devices that can be plugged to the computer; how much further can you push your total resolution coming out from your system among all physical outputs??

Just trial en error?? On some gpu specs it specifies the max resolution.. for example for my gpu it is 4096*2160... does this mean that that´s the max amount of pixels i can get? no matter on what kind of array (display layout)??

Sorry if it is a dumb question.... but ím having a huuuge gig coming up and i´m starting to do some px math here..