Thanks to your quick and awesome user feedback, we were able to squash a few important bugs that had snuck their way in to the 4.1.9 release. So here's the 4.1.10 update which fixes the following bugs:

[FIXED] Glitches and crashes with some clean aperture clips
[FIXED] Twitch does not load correctly on PC and OSX 10.6.8
[FIXED] Slice stacking order is reversed
[FIXED] Alpha layer blend mode and Alpha clip transition do not work well together
[FIXED] Flash crash on Mac when removing with X button on the clip panel

We tweaked lots of little things in lots of little places. The devil is in the details, so while you’re downloading, check out the full release notes below.

A special note to people on OSX Mavericks: in some cases, Resolume’s performance would drop when the menu bar on the second screen was disabled via ‘Displays have separate Spaces’ in the Mission Control system settings.

In 4.1.9, we are removing the menu bar automatically. So we recommend enabling ‘Displays have separate Spaces’ again in the preferences of your Mac. 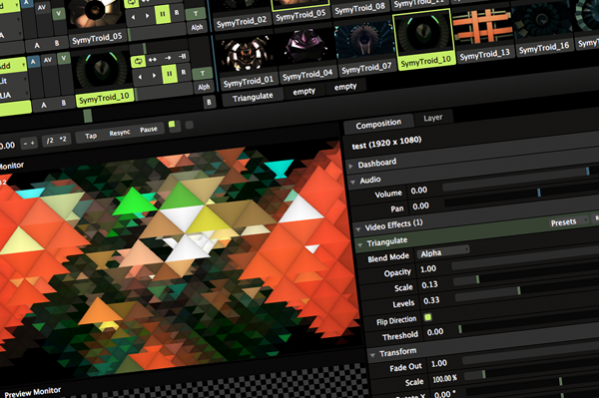 NEW: Scroll to layer and clip when made active with shortcut
NEW: Disable scroll to layer and clip via Preferences
NEW: The playhead and In and Out points show their values in MM:SS:FF
NEW: When position x/y is animated, set default in and out points to comp size
NEW: When a monitor is lost, it is disabled instead of moved to the remaining monitor
NEW: Remember deck scroll position per deck
NEW: Show audio codec
NEW: Audio FFT Gain knob is midi mappable
NEW: Polish translation ( thanks to Marek Olczak! )
NEW: PolkaDot, Triangulate and Twitch effects

FIXED: Output doesn’t cover Menu Bar on second screen on Mavericks
FIXED: Alpha Transition crossfade
FIXED: [CRASH] Selecting a buffer size of 64 or lower gives spinning wheel of death on Mavericks
FIXED: Black level compensation no worky
FIXED: Saturation filter doesn't actually saturate
FIXED: RGB Delay does not initialise the viewport correctly
FIXED: When show display and slice info is turned on, syphon displays show "no device"
FIXED: Screen (both interface and output) flash black when dragging a clip from the browser
FIXED: Syphon source does not have a duration
FIXED: No worky for different user on OSX
FIXED: On windows startup, the last layer is selected
FIXED: Position X/Y does not have a midi range for spinner
FIXED: Transitions are wonky when incoming clip is Syphon source
FIXED: Opening a VST ui for the second time gives a blank white window
FIXED: Composition Midi Map shortcuts for BPM Tap/Pauese/Resync/-+ are not saved
FIXED: SMPTE stutters after ~30 minutes
FIXED: Recording a file with special accents in the name did not save and load correctly
FIXED: Composition master opacity is multiplied with slice alpha
FIXED: Autopilot does not kick in at the right moment after scrubbing the playhead
FIXED: Bright line on edge blend
FIXED: Disable Quit Confirmation doesn't work on Windoze
FIXED: Menubar pops up when using a parameter from property panel in windows
FIXED: [CRASH] when creating a new comp when the advanced output is open
FIXED: Cursor no snappy on folded effects
FIXED: If Show in Finder/ Explorer is chosen, would be nice if the file is also actually selected
FIXED: Waveform zoom does not go away when switching to empty clip 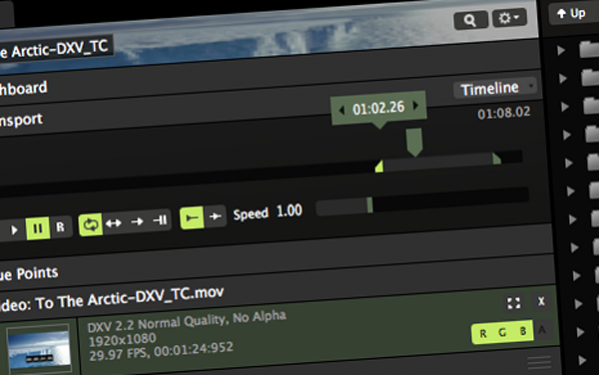 
Seriously,. this update is f*** amazing.
Improving the workflow sometimes is way better (and more necessary) than new features.

I have been waiting (and made a request here on the forum) for the automatic 'scroll to layer & clip" feature.
This is one of the biggest improvement you guys could have ever given to us, it will make the workflow way better and more intuitive, and consequently more creative.

and the other improvements are also great, the X/Y in/out animated parameters to comp size is crucial.

As always you rock.


Scrolling clips AND Twitch effect; you guys have just made my life a whole lot easier. Many thanks!


Thanks! Great news... Looking forward to upgrade to Mavericks : )


Awesome - downloading now. Especially excited about the Alpha transition improvements as I use a lot of Flash overlays. And the clip scrolling. And the new effects. And the other stuff. All of it really

1) New effects awesome! I love the Twitch effect from AE and it's a very welcome addition here, and the Polka dot effect gives a lovely halftone effect which I had been recreating using Dot Grid and Pixels in Space. Nice one

2) The Alpha Crossfade doesn't seem to work when the layer blend mode is set to Alpha, though it works fine when using Add50 or Add (but I can't remember if it worked like this in 4.1.8 will need to check). Conditions are:

This happens both when using PNGs with alpha channel and also Flash anims with Alpha.


Sorry to disappoint you Craftycurate, but the prize for first bug report goes to Ravensc: viewtopic.php?f=12&t=11135


Beyond the Mavericks stuff, my favorite changes:

NEW: The playhead and In and Out points show their values in MM:SS:FF
NEW: Remember deck scroll position per deck
FIXED: Composition master opacity is multiplied with slice alpha

Thanks for your work.


Not a bug report but still a request to see in the next version -
NEW: Installer now offers to copy fx and presets from previous installed version.


Very happy about the alpha transition fix. Nice one.


AWESOME!!!
once again, thank you very much!!


Cool update. I'm noticing that my sfFreeframe plug-ins are no longer popping up. I placed them into the new vfx folder. Any ideas?


Make sure you copy

from your previous Resolume root to the 4.1.9 root to get the sf FFGLs to load.


"FIXED: [CRASH] Selecting a buffer size of 64 or lower gives spinning wheel of death on Maverdicks.

Love the clip scrolling.
Thanks dudes.


lotech wrote:Not a bug report but still a request to see in the next version -
NEW: Installer now offers to copy fx and presets from previous installed version.

A small tip for those who find this onerous: copy all your 3rd party FFGLs to another directory and then link that directory in Resolume/Preferences/Video/Plugins.

Doesn't sort out your presets though and you still have to link the directory but good for updating plugins across installs and getting set up quick on a new install without copying files around. Also doesn't deal with files that have to be in the Resolume root (e.g. spout) but I doubt the installer could/would want to handle these for users. Comment from Joris:


This is indeed the recommended way of working with 3rd party plugins. Personally, I make an extra folder for them in the Resolume folder in Documents / My Documents.

Presets are stored in a presets subfolder in this Res docs folder, so they are already maintained between different versions.

Btw, when updating, all you have to do is trash the previous Resolume 4.x.x folder, which lives in Applications / Program Files (x86). Some people seem to use 3rd party apps for uninstalling. These apps trash every folder that has the word Resolume in it. Of course this means that you lose all your comps, presets, effects and even your registration.


I've tryed the 4.1.10 version on win7, and I found that don't allow me to load clips with non standar characters in his filename (á,é,ô, etc). On the same system, v4.1.8 load the clips without any trouble.
Then I've tryed the same version on another windows installation and worked fine, as usual.
Any tip about that?