Occasionally, a certain project will catch your eye. When you start watching and listening, you find yourself drifting away for a few minutes. The acoustic and the optic will blend together to one beautiful harmony.

Such a project is Intermittently Intertwined by Bob White. Take a moment out of your day, and watch this in HD with some good speakers.

We were even more amazed when we found out that the video above is actually created in realtime. It's not often someone is equally talented at music, motion design as well as coding. So we had to find out more about the project.

In Maya I make a series of quick geometric loft animations and export these as alembic files (.abc). Alembic files are point cache animation files that are typically used to transfer dynamic simulations from say Houdini to Maya. Because I wanted the geometric element to "grow", alembic is a good vehicle as I'm animating vertices.

The brilliant ofxalembic addon loads alembic files as meshes in OpenFrameworks. Because my geometry is fairly low poly count, I can run a lot of them at the same time triggered by Midi notes. Surprisingly even with a lot of polys, playback of abc files is very fast.

My ofApp is very much a work in progress and the code is sketchy at best. The app has ~25 slots for abc files per scene. Additionally, I setup 6 scenes that can be switched with OSC messages. Each abc file can be triggered by an incoming Midi note and there are controls to randomize the playing of single abc files (single actions) or triggering sections of an abc file in sequence (sequence of actions).

I recorded a song I wrote in Ableton and setup a number of Network Midi tracks to send data to my ofApp. I then paint notes that drive the animation. The network midi sends trigger data directly to ofApp. Additionally I send minimal OSC messages to change scenes in my app. 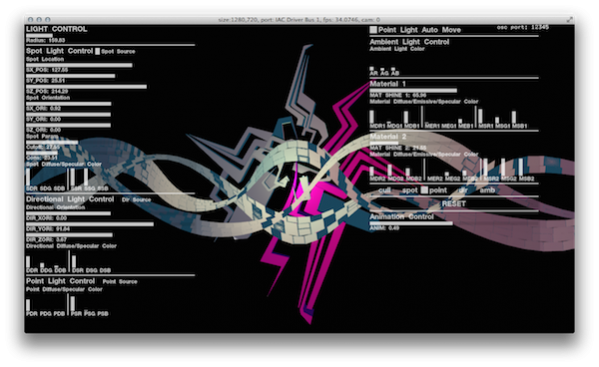 I love the Resolume M4L devices and I would use them, but because I've finalised the song mix in the session view I used the showsync.info M4L devices to convert midi notes to OSC. The OSC changes scenes, clears the screen, and moves the camera. Alternatively, if I were working in the session view, perhaps looping or performing live, I would use the Resolume M4L on clip launch to send OSC.

The ofApp has Syphon enabled so I can display it in Resolume. I have some effects on it like Mirror and Edge Detection to sweeten it up. Like I said, next i would love to explore Ableton control more of the params in Resolume. I would also love to make put this whole app in a FFGL plugin that way I wouldn't have to rely on Syphon. So much to learn

Alone the animation is kinda static if it were not for the mirror effect. It's refreshing to be able to easily change the character of the animation using Resolume in real time. Having the ability to "paint" the animation, see the layered effects in real time, I think allows for a more immediate process. For me it's important to be able to work fast so not to get caught up in minutia.