Taking the World by Storm (Part 2)

Hello all you video junkies. This one's just for you.

It took a while to digest the awesomeness, but Part 2 of "Taking the world by Storm" is here. 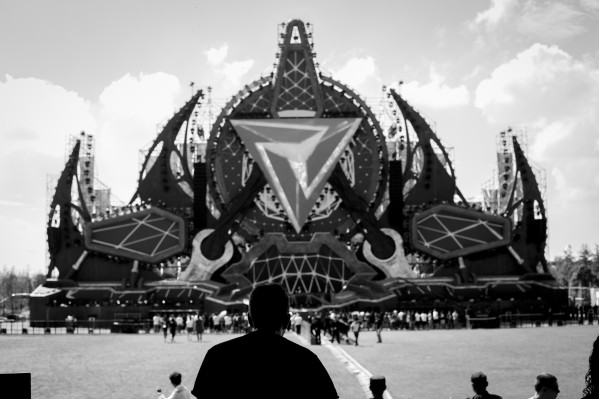 Brandon Chaung, the local VJ on site, talked us through the whole process. And it is intense.

So, sit back..relax..a Storm is brewing.

What computers did you use for the show?

I used both PC and Mac.

I like PC because it is powerful and easy to upgrade. Especially with the graphics card (MXM 3.0b) and storage -which are both essential for running Resolume.

I replaced my optical drive with a SSD for new custom footage for the show (I have more than 40 decks in my composition).

I like Mac because of the great onboard audio quality. Also, it’s less of a hassle for audio playback and midi mapping, when using Resolume with other applications, at the same time.
I switched between two laptops with a Barco Encore switcher.

It required four HD outputs to cover all the LED panels we had.

Both the circle screen and the one behind the DJ booth are split into two outputs. Which makes it important to have synchronized outputs. 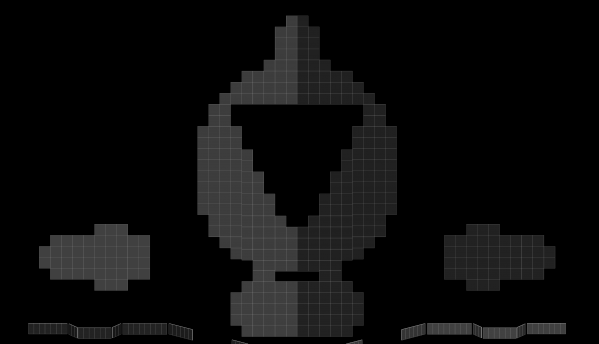 The 4kTwo display controller provided by Flux studio did a great job.
It is a Chinese brand which has similar, but less, features than the Datapath X4 that other VJs brought for the show. [/i]

Talk to us about Resolume, maybe you have heard of it? *grins*

Resolume Arena is my first choice for media server.

It runs great on both operating systems. I can have exactly the same experience while VJing, no matter if I’m on a PC or a MAC. I can switch between the two without thinking.

Another great tool that is worth mentioning is Chaser by Joris. Woo hoo!

I find it super useful when I use it for switching between different mapping settings and even masking.
Some VJs use Madmapper or mapio to switch mapping. I prefer doing this with Resolume.

Normally, I apply two Chaser FFGL plugins on each layer. One is for switching between different output mappings.

So, after some set up in Advance output and Chaser, during the show, I can just pick the footage I desire, set the screen I want it to show through Chaser (using steps) and boom it’s on!

And, I can mix different layers with different mapping without losing blend mode.

Also, what I see in the preview window can be very close to what I get on the actual screen.

A second Chaser plugin applied in the EFX chain (sometime I don’t need it, or if in future it supports polygons other than triangles) is to mask out unwanted parts of the layer that shows on the screens I don’t want it to.

For me it’s better than applying crops and adjusting XY position in different layers, because I can just make use of the slices in advance output.

This technique is very useful for the circle screen in this show.

Can you give us details about how the LED was mapped?

I did the mapping by starting with numbers.

Then, it became like a math exam in high school or a puzzle to solve. The goal was to make the best use of every pixel of every HD output.

Try to find the most efficient combinations of each slice. At the same time, think about how to run the CAT.5 cable through every module- with less cables. 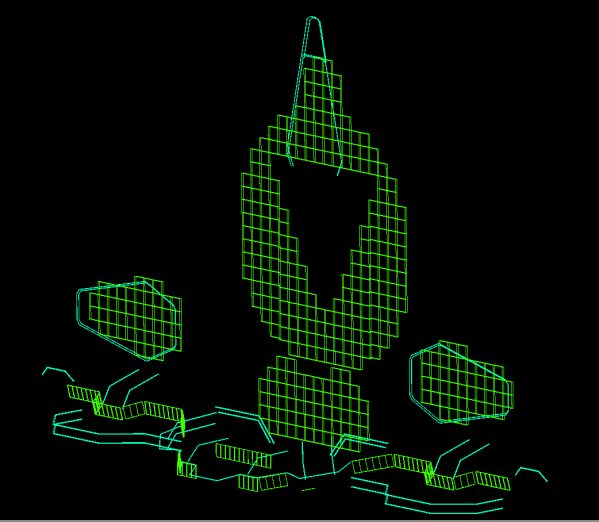 This is the the front view of all the LEDs. Below the name of each slice is the number of modules followed with the pixels in width and height. The circle screen is cut into 8 slices using two HD outputs. The main screen is spread across two HD outputs.

Next, we come to the pixel maps for the four outputs. 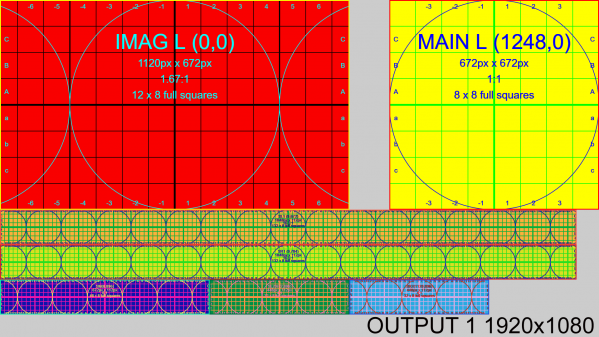 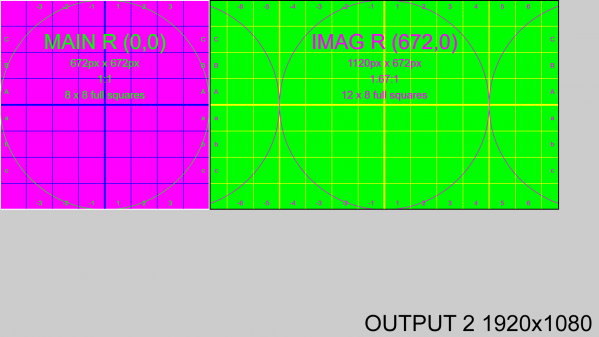 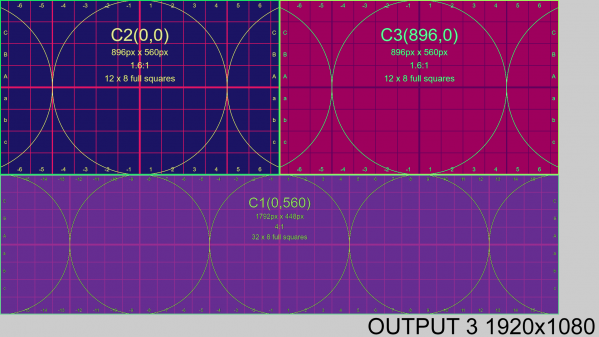 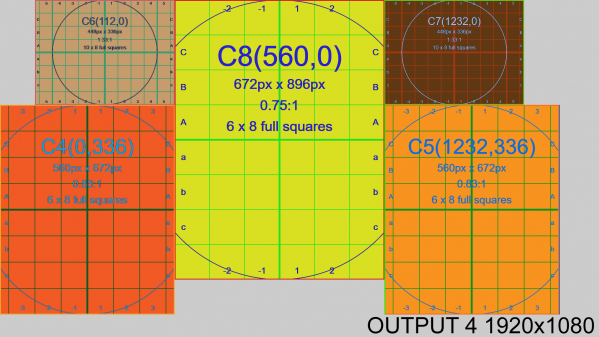 I actually quite enjoy this process.

The advance output of Resolume Arena is pretty handy when solving the puzzle. The fixed snapping across screens in Arena 5.1 saved me a lot of time.
Then it’s time to match the advance output with the pixel map (Thanks to the new feature about importing .png into advanced output). After adding a few masks and adjusting it to fit 4k output, It’s pretty much done with the basic setting. 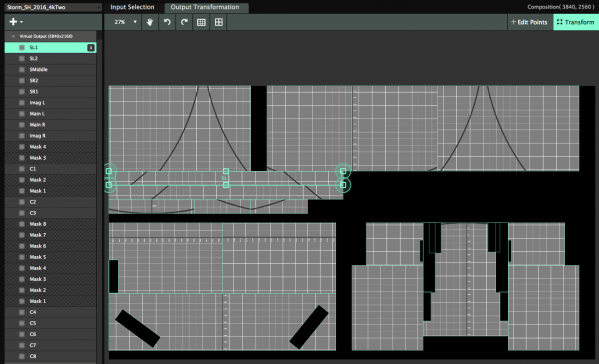 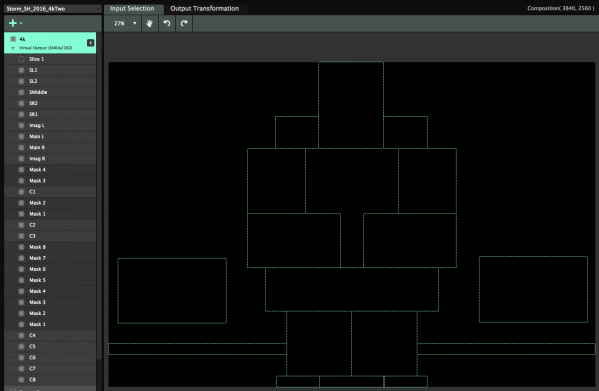 Now comes the most interesting part, Chaser.
I added another virtual screen at the bottom just for Chaser slices.
These slices are just for Chaser programing. Dosen’t really output anything. 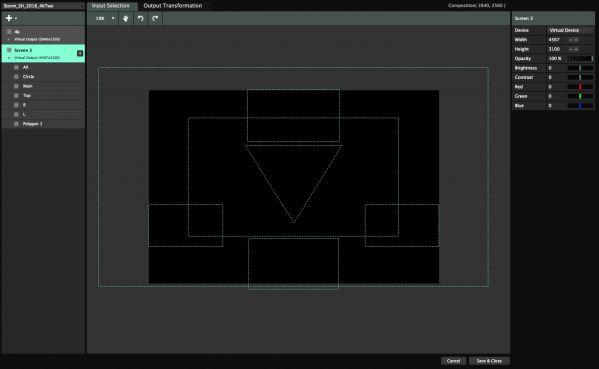 From these slices you can see it’s all in the ratio of 1920 x 1080, except the center triangle used for custom footage. This also shows how I scale and postion the footage (Most of my footage is in HD) 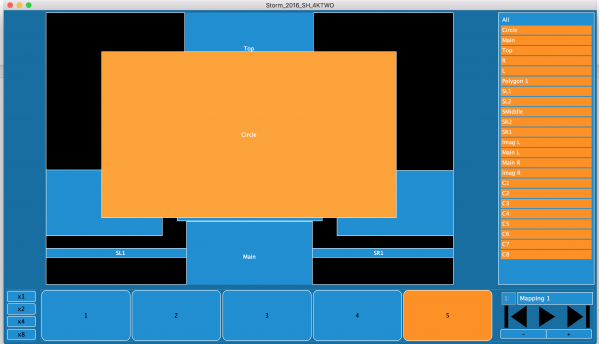 This is one of the mapping when I want the HD footage focus at only the circle screen, but then notice it also covers the IMAG screen. This will be masked by the second Chaser plugin 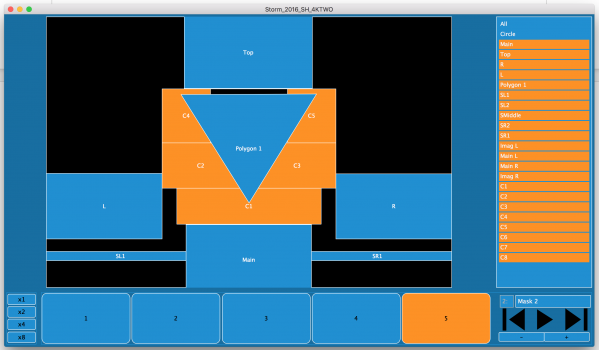 Then, I create another sequnce to pick the screen I wanna preserve. So it functions like a mask. Here, I picked the circle. Note that both these two sequences have the same amount of steps. 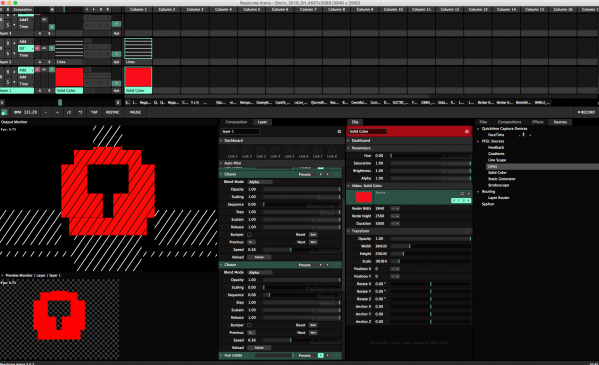 In this picture you can see the result of what we did in the preview window. I put another layer of lines in different mapping, opacity at half and used diffrence as blend mode. So you can see the blend mode still works like a charm.

Then, I assign both steps of the Chaser plugin to one fader or knob on my MIDI controller. So I can switch it really fast.

This is how I arranged the mapping for this show.
Of course, I still use Chaser to create bumps like it was designed for.

In my mind, I feel that there must be many other creative ways in Resolume to fullfill my imagination- about how my visuals should look, or how I can respond to the music, the moment I hear it. Or when the screens and cues get complicated, how do to it in a simple way.

I’m glad so far Resolume had never let me down.

*Blushes* Thanks for your great words, Brandon!
Quick question- a lot of VJs have been complaining of overheating of MACs, was this a problem during the show?

Not on the 1st day because it was cloudy.
But on the 2nd day, right before the show, I found my MacBook lagging and it was exposed to direct sunlight.
After a reboot and change of position, it came back to normal. Other than this, it was all good during this show.

I think it is not a problem only for MacBook, but with my PC too- it just reacts differently.
The overheating can cause Resolume to crash on my Windows laptop.
So, extra fans for both PC and MacBook become a must have for most of my outdoor events.

With this, we come to an end to this two-part extensive coverage of Storm Festival, Shanghai.
It feels great to see the new features we develop put to use, in multiple different ways. Sometimes, even in ways we didn't fathom while developing them

Thank you to 250K and the entire crew for doing such a great job at the festival and then educating us about it, in these interviews.

Until we see you again- go try Chaser like Brandon explained. Go on now, get moving. Posted by shipra on Wednesday December 14, 2016 at 04:47 Tags: behind the scenes * chaser * pixelmap * storm festival * video Login to the forum to comment.