It's less then two weeks since we released Resolume 6 Beta 1 and here is Beta 2! In this version we fixed a lot of crashes and made many improvements. Please log in to your account and download this second Beta. Let us know on the forum how it goes! 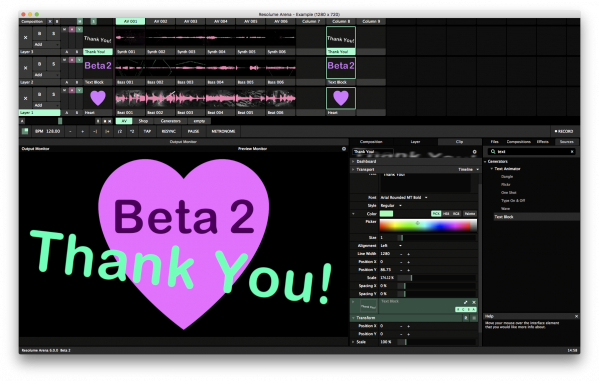 Thank You!
When we released Resolume 6 two weeks ago, we must admit, we were quite nervous. But we were overwhelmed by all the positive response from so many of you! It's so nice to see your enthusiasm for something we have worked so hard on for so long. Brenton March sums it all up with his top comment on Facebook: "YOU DID IT! you fixed EVERYTHING! the media manager alone makes me smile so hard, but all the other stuff, the custom UI, the new grouping system, wow. and 64 BIT!"

And we love how sometimes the little things matter the most. Cosmowe says on the forum: "OK...I'm done!.....the scrollbar is Midi mappable!!!!!

Ryan Whitmer expressed his joy with this gif:

Thank you all for making us smile and glow with pride

Quartz Composer Removed
It wasn't all fun and giggles last week, unfortunately we had to make the difficult decision to remove Quartz Composer playback from Resolume 6. Quartz Composer was causing a lot of bugs and crashes that are impossible for us to fix because it's really not made to be used in a multi-threaded rendering application. Apple has abandoned Quartz Composer for years already so these problems are not going to be fixed. Of course Quartz Composer playback is still in trusty old Avenue 4 and Arena 5 and it will always stay there. Posted by bart on Thursday September 28, 2017 at 14:47 Tags: 6
Comment from cosmowe:


This is cool.... The great VJ from famous DJ AJ show me and team the new 6 when they come and play in Bali few month ago, I was excited about new version and now its cool all people can test it...
Its fast than lower version, I just realise that quartz composer is removed.. yes its make so much bugs..
I like the new customisable layout and the slicing can directed to each video..
Need to test in big led screen asap..


I have the same problem, it won't open for me (MacBook Pro Mid -2015 running OSX El Capitan 10.11.6), and the suggestion to change the documents folder didn't work for me unfortunately.
Looking forward to exploring future updates


Yes, give us a guide to stress it lookin for bugs.


Keep up the great work!
No time for a changelog - that would take up more bug squashin' time!


Lemme know when comps from ver4 are supported