Touch down in Philadelphia, we’ll be at DJ Expo in Atlantic City together with Denon DJ this week to show the integration of Denon’s StageLinQ protocol into Resolume Arena. StageLinQ enables Arena to automatically video sync to Denon’s Prime DJ players and mixer.

Arena can not only play video in perfect sync with the playing audio tracks but it will also recognise the songs being cued and automatically start the corresponding video. Just plug in the ethernet cable and you’re ready to go. The DJ has full creative freedom, scratching, pitching, looping and firing cues, the video in Arena will stay in perfect sync.

We’re very excited to finally show the Denon DJ StageLinQ integration in Arena, we think this is big step forward for synchronised shows. 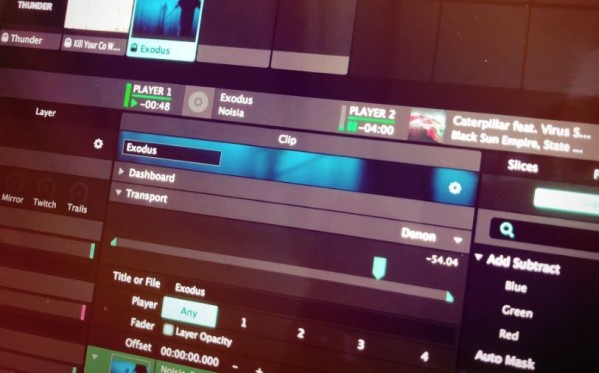 Come and visit the Denon DJ stand at DJ Expo. We (Edwin and Bart) will be there for demos. Resolume Arena version 6.1 with StageLinQ integration will be publicly released in a couple of weeks. Posted by bart on Tuesday August 14, 2018 at 16:15 Tags: Denon DJ * StageLinQ
Comment from Arvol:


20 years from the last time I've saw someone playing with denon stuff. Djing isn't my field, so I don't know why, but all djs I see plays with pioneer equipments.


So as probably half the community ask themselves, why Denon? As mentioned here above, it's Pioneer everywhere and Denon very very verrrry sometimes, why the choise to work with Denon?


Nice feature guys! It is a shame Pioneer doesn't open their protocol.
Though: https://www.pioneerdj.com/nl-nl/news/20 ... tc-supply/

They never "opened" it for TC Supply. They were old Pioneer engineers that reverse engineered the protocol about 8 (?) years ago and Pioneer finally added in support Comment from warpnote:

Have you ever thought about doing something like this with Serato DJ Pro?
It would be so useful for my club gigs!


To implement sync with any type of player, software or product, the company making that player or software first has to release an official protocol. This protocol, also called an API, specifies what kind of data the player will be sending. If the API includes everything that's needed to establish sync, we can then take what we need and implement it in Resolume pretty easily.

Afaik, Pioneer and Denon are the only ones to have such an API. Of those two, Denon is the only one that allows 3rd party developers to use it. Furthermore, Denon has been amazing with their support and response to our questions and problems.

So, for anyone asking 'have you also thought about doing this for software X', the answer is yes. Yes, we have thought about it, but we can't do it either because of legal reasons or because there is no existing API that we know of. So if you'd really like to see Resolume support a certain product, you have to talk to the makers of that product first. If they're feeling it, they can always talk to us about further steps.

Something you might want to keep in the back of your mind is that developing an API is a gigantic undertaking for a software company, both in time spent on developing and later on supporting it. You need to get it right the first time and then it needs to work forever and always. Nobody likes an API that changes with every new product you release (o hi Magewell). It's what software engineers use to scare their children to bed with.


Thanks for the insight Joris, really appreciate it!