Update: April Fools
It's now May 2019, 8 years after we made this April fools joke and we're still receiving emails from people asking where they can download this. I guess this was one of our best ones

Oh yes, you read it right. Resolume 2.41 is now available for the iPad!!! Mix clips the way you were used to from back in the day, on your o so shiny mobile touchscreen.

When you think about it, it actually makes you wonder why it took us so long to get it together:

1. Resolume 2.41 was made for 1024x768 resolution screens, which just happens to be exactly the size of the iPad display.

2. Resolume 2.41 doesn't use the GPU as much as Avenue, so even a device that doesn't have a modern GPU like the iPad can run it. 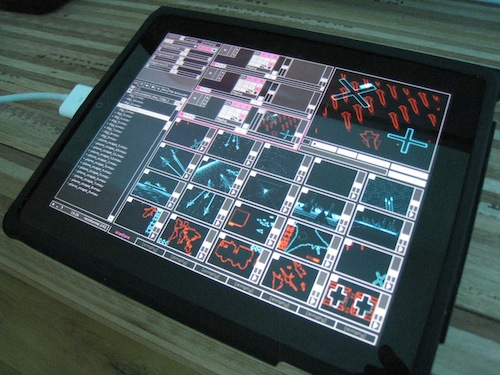 With the recent release of the iPad 2, we now can let the dual cores handle the work. And this makes things fly like nobody's business. That's not to say R2.41 iPad Edition won't work on the first version.

The cool part of this (for us geeks) is that we did not rewrite Resolume 2 to run on iOS, ooh no that would have been too easy. We looked at the Win32 API calls that Resolume 2 makes and we wrote a partial Windows emulator that runs on iOS so normal Windows programs can run on the iPad and iPhone. This concept is similar to WINE on linux and could theoretically be used to run other Windows on iOS too.

Check out the teaser video, and then head over to the iTunes store! 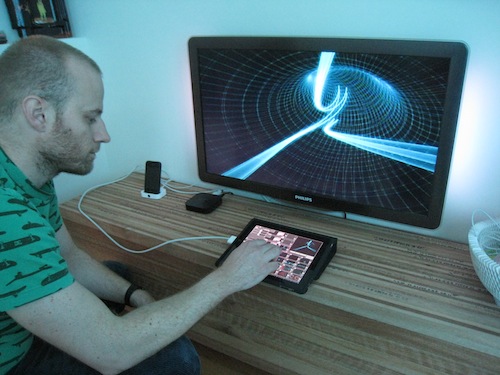 
this is really cool although not was i was expecting - i thought this would be a controller for avenue that showed the clips on the ipad -
what is the likelyhood of something like this coming out?


Thats bollocks and I claim my free ipad.


this is neat. i'm always looking for ways to add good-quality, random-access loops into my kit. and the size of an ipad is right as an add-on

i don't have an ipad (or any idevices) but this makes me want one.

does it process at different resolutions (like on the pc) or is it preset to only process at a specific resolution?

some good info on what kind of performance one can expect on an ipad2 would be great.

what codecs should the media be formated in? picvideo .avi files? or mjpeg .mov? do the same rules apply on prepping clips?

what is the price? (i don't have an idevice to check out the app store with) i would be getting an ipad2 specifically for res2.4 so more info would help me understand if it is worth the investment.


I tried to look it up on the app store but couldn´t find it.

Ok for some reason my itunes is in german tonight.....dough!

Am I an idiot for believing?


well, i am CLEARLY ignorant of what is possible on an ipad platform...i am a fool... to quote the white wizard:
"There never was much hope. Just a fool's hope."

(hope you can all appreciate a little teasing)


So how did you guys pull off this video?
Is that a video file playing back on the iPad?
Is the iPhone running airplay to the Apple TV?
Great work!!


So how did you guys pull off this video?

Glad you like it! Although having the R2.41 interface was an april fools joke, the iPad is very capable to trigger and play back video with. So there are actually videos being triggered and sent down the VGA adapter in the video. It's a platform we're very interested in developing for, but it's going to be a long road before anything hits the app store.


Resolume 2.41 is still not available on iPad, but it work well on my Asus eeeSlate EP121

For the output, a HDMI to VGA adapter, and let's go !
Will post video soon