Coming Back From the Dead - Night of the Living HD Mixers

Just when you thought it was safe to drag out your old analog MX50s again... 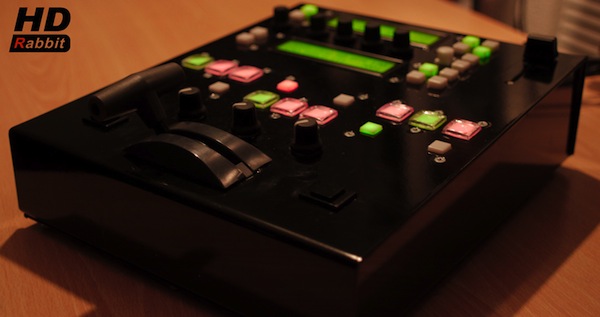 A little while back (okay, a big while back), we posted about the current state of affordable HD mixing using the TVOne box. At the time of writing, only one of those projects was in an actual released state. The iMixHD is a great piece of software, not in the least because it's free and open source. But deep inside, the idea of a physical standalone mixer with a T-Bar was still nagging.

Flash forward to a year later, all of a sudden there's not one but two such projects that are both finished and actually in production!

First off, there is of course Toby's Spark d-Fuser. The d-Fuser is an elegant piece of kit, both the functionality as well as the box itself are amazing. It is a clutter free interface that does what it needs to do: mix between two sources. Being fans of intuitive design that doesn't get in the way of your creativity ourselves, we have to tip our hats to Toby on this one. Currently the first run is sold out, and the latest news is that the casings have arrived and look beautiful.

Then, out of the blue, the boys from CarrotVideo come with their own take on the TV-One, the tentatively titled 'HD Rabbit'. Focussing more on giving you access to everything the TV-One has to offer (it actually does a lot more than fade or key between two sources), they've made what Edirol should have done a long time ago: an HD V4.

In their own words:

The HD Rabbit is a HD mixer and controller based on the TV-One 750.

We know what you're thinking now: 'Really? Another TV-One based mixer project? Really?'.

And we feel you on that one. There have been some awesome projects based on that little gadget, some of which turned into very well designed, thought out, and most importantly, very real products. So who are we to come up with yet another one?

Truth be told, we feel that you can do a lot with the TV-One. The AB mixer and keyer are its primary functions, but it has some very powerful scaler and image adjustment functions as well. It's just that its interface is so ridiculously clunky.

So we designed a more user friendly interface. All the useful functions of the TV-One are accessible in a more human way. Having grown up bashing our V4s to bits back in the 90s, all we really wanted was a similar experience, but not limited to crappy PAL resolutions. Let's face it, there was something innately satisfying about spamming those cut buttons, or strobing the output until the light engineer gave you the evil eye.

So we were dragging this piece of kit with us to shows, where it took up valuable space on our already crammed table. It did the job, but it was lacking something. Then it hit us. Why not make it a software controller at the same time? Besides OSC input for the main TV-One functions, we added fully customizable OSC and DMX output from the buttons and rotaries. Basically we made one big box with the flexibility to mix and control our favorite applications.

No more eighties looking hardware effects, instead we're controlling realtime effects in glorious HD at 60fps. No more overtaxed CPUs, instead we're cutting back and forth between two HD sources like it's going out of fashion. What more could you ask for?

We don't know either.

That's why the HD Rabbit is currently being produced in its 0-series run, contact us at http://www.carrotvideo.com for more info.

Especially interesting for Resolume users is the customizable OSC output. As you can see in the video, the HD Rabbit is preconfigured to send BPM info to Resolume already, but all its other knobs and buttons can be assigned OSC commands as well. This could very well be the next step in hardware controllerism.

We've actually been lucky enough to see this gizmo in action, and have pounded those cut buttons to see if it they held up. We were pleasantly surprised so rest assured that we'll be following this one with great interest. Posted by Joris on Thursday October 18, 2012 at 14:43 Tags: TV-One
Comment from Basic:


wow - just like a bus, you wait ages and then 2 come along at once. Great news and looks like a really good piece of kit.


they've made what Edirol should have done a long time ago: an HD V4

a long, long time ago